This article lists down some common queries you might have while creating, scheduling, or managing your posts.

SocialPilot allows you to add images, GIF and video to make your posts visually attractive.

Some platforms don't support posts with multiple  due to their API restrictions.

You can  add a GIF to posts on the following platforms:

SocialPilot allows you to  add a video for posts on the following platforms:

But wait. With SocialPilot, you can add videos to posts for non-supporting platforms as well. The post will have a link which when clicked on, will lead to SocialPilot's video page. Your video will be played on this page.

How are my videos shared on social media?

SocialPilot gives you the liberty of posting videos of any size.

So, what happens if the video is larger than what is allowed by the social network or if the network doesn't support video uploads. The video gets uploaded on our servers, and a link to the video is shared in your post.

This is how your videos will be shared on different social networks:

What does the ‘Copy To’ button do?

The 'Copy To' button allows you to copy all your scheduled posts and schedule them from other accounts.

1
Log into your SocialPilot Dashboard.
2
Click on  Posts & Manage Posts
3
Select the posts you want to copy, one by one. To select all the posts in the queue, just click on the 'Select All' checkbox.

You'll find a 'Copy To' button. Click on it and select the accounts you want to copy these posts to. 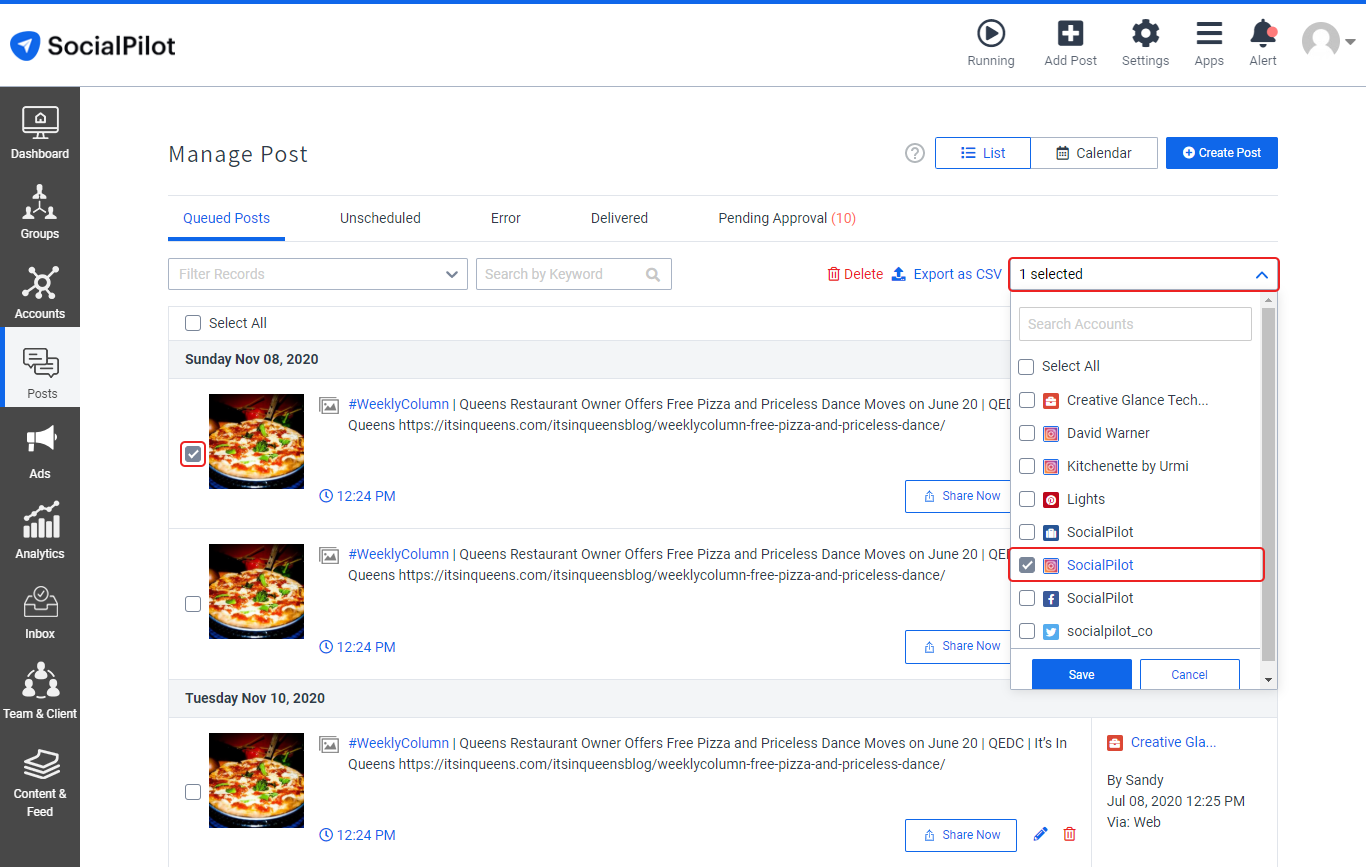 Note: If you are doing the ‘Copy to’ function for a post scheduled for any date and time independently, it'll copy the post for the same date and time. However, if you do the same for a post Added to Queue (scheduled as per the pre-defined time slots), it'll schedule the post as per the time slots defined for the account for which you're making a copy. If there are no timeslots added, the copied post will go to the Unscheduled tab.

Can I add hashtags in my posts?

While the hashtags will appear like plain text when you create posts, they will be published as clickable hashtags.

I can’t see any image in my post preview. What should I do?

If you are that site's owner, you will need to make some modifications to the page to accommodate an open graph meta tag.

To check whether the URL is validated by Twitter, visit this page. If your link generates a preview here, it will definitely generate a preview when it's published from your Twitter account.

However, if the validator doesn't crawl the meta-data and shows an error, then the link is not validated by Twitter. Consequently, the link will be published as plain text. We suggest you check all your links using the Twitter Card Validator.

When you use a third-party tool (like SocialPilot) to publish posts on your Facebook Page and Groups, your posts show 'Published by the *name of the tool*.'

Don't worry! In the case of the Facebook Pages, only you (the admin) can see this - other users won't be shown 'Published by SocialPilot.'

Posts published to Facebook Groups will show a "SocialPilot" link, which is visible to both Admins and followers.

We want that source stamp gone too. This source stamp is something that is added by the social network platforms. Hence it is not possible to remove it. As per the guidelines of Facebook and Twitter- All third-party scheduling tools will have source stamps on the posts published through them. We wish we could remove it, but unfortunately, it's not possible for the time being.

How can I share my WordPress Blog posts with SocialPilot?

There are two ways you can share your Wordpress blog posts with SocialPilot: